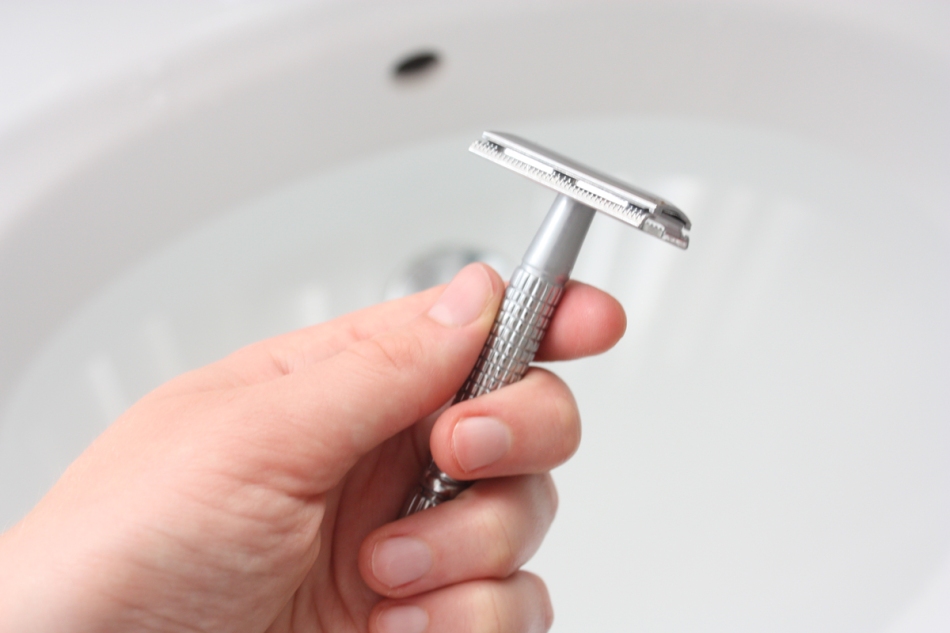 A couple of weeks ago, I decided to try something different. Something that felt a little bit dangerous as well. My father and brothers use them all the time, but somehow I thought that as a woman, I was obliged to buy the pink, disposable version. Yes, I’m talking about razors.

Just a little disclaimer before I get started: Everyone should feel free to do with their bodies whatever they want. Even though I do shave, I don’t really care if you prefer to be hairy or hairless. The main purpose of this article is to show a plastic free alternative to disposable razors.

Disposable razor blades and the environment
In the 1990s, the EPA estimated that we threw away about two billion disposable razors in the United States alone. That number has since risen, meaning that billions of razors and razor cartridges are ending up in landfill. 2 Billion razors, that’s about one million pounds of plastic waste. (source)

And if we’re talking about disposable razors, we should also think about the packaging: for every disposable razor and razor cartridge you buy, there’s the plastic packaging to deal with as well.

How can we stop razors ending up in landfill? Simply by not using them. When choosing for the safety razor and thus going plastic free, you will make a great impact.

Pink tax – an extra fee for women
Have you ever heard of the pink tax? It’s often seen as a form of gender-based price discrimination. Its name stems from the observation that many of the affected products are pink. You shouldn’t see it as a literal tax, but as a broad tendency for products marketed specifically toward women to cost more than those marketed to men. This study shows that the largest price discrepancy was in hair care; products cost women 48 percent more. Razor cartridges were the second largest price discrepancy, at 11 percent more for women on average. One could argue that the quality of the product may be different, even better. Lots of products targeted toward women are branded as “soothing”, “for sensitive skin”, “with aloe vera extract”, etcetera. But the same study as above shows that

(…) often, men’s and women’s products will have the same features, but the women’s will cost more. For example, women’s razors and razor cartridges cost more, and usually have prominent claims of moisturizing strips or features for sensitive skin. However, it is also often the case that men’s razors and cartridges have aloe moisturizing strips or are marketed as intended for sensitive skin.

Blasio, de, B. Menin, J. From Cradle to Cane:The Cost of Being a Female Consumer

Now, I won’t go into the details of why there is such thing as a pink tax, but this doesn’t seem right. There are many ways in which we can show society that we are fed up with how women are treated unequal to men. One way is to stop shaving. During the cold winter months, I don’t care about body hair. Even during summer I sometimes can’t be bothered to shave my legs, but for hygienic reasons, I prefer to keep other parts of my body shaved. So then how do I fight pink tax?

I could turn to only buying products targeted toward men. “NIVEA for Men”, “For Real Men Only”, that kind of stuff. For lots of “male” products you actually pay less, so it makes sense to turn to man-targeted products instead. But then there’s still the issue of plastic waste which I want to avoid.

The best alternative (if you prefer shaving, that is), would be swapping to a safety razor. This means no plastic waste. You’ll be contributing to a better, cleaner world with less plastic waste. Plus side; the blades last a great deal longer than disposable ones, and the blades themselves are recyclable.

My experience with the Munity Safety Razor
I’ve been wondering where safety razors got their name from. I mean, these things don’t look safe at all! It’s quite intimidating (the blades itself, I mean) and putting them in the holder was something I dreaded doing. The very first time I used my safety razor I decided to only shave my legs, because I didn’t dare use it anywhere else! I used “Pirate’s Delight” shaving soap, which is plastic free as well. It smells great, it’s foamy and helps your razor glide smoothly over your skin. No need for aloe vera strips!

Breathe in, breathe out. Okay, Lisa, you’ve got this. The first stroke I could barely stop my hands from shaking, but I knew I had to stay calm, otherwise this could turn into one big bloody fiasco.

After a while I got the hang of it and felt more confident. Or I should say, I became overconfident, shaving away the jungle, feeling so pleased with myself. And then suddenly – ouch. Just above my ankle. I managed to cut myself. It was quite painful, and it kept bleeding for quite a while. I know I’m not really selling the product right now, but this is something that could’ve happened with disposable razors as well. I think lots of people who shave their legs will agree that the area around your ankles is the most difficult part to shave without wounding yourself!

All my male family members, friends, colleagues and acquaintances who use safety razors have definitely earned my respect. For me, the hardest part about the safety razor is maneuvering it. Unlike the pink taxed razors I was used to, the head of a safety razor doesn’t bend with your every move. So you’ll have to find out what angle works best to shave certain parts of your body. Imagine having to shave your chin and jaw line with the safety razor; I’m not sure if I could do it! 😉

About the result: my legs felt so much more smooth than after using a disposable razor. I’m definitely hooked, even though I’m still a bit afraid to cut off a finger or my nose. 😉 But as it is with almost everything in life: practice makes perfect.

This article is in no way sponsored. I did in no way receive any payment or other products for posting this on Kitchenoflion. For more info, please visit my disclaimer.

1 comment on “Safety Razors: Everything You Need to Know”